Ile de la Cite The Island of the City

For a small island there are actually many separate things it, though some are small and discrete, so consider this list and choose the ones of particular interest. Starting from the east and moving west they are:

Square du Vert-Galant – Despite the name, not a square at all but a thin triangular park taking up the eastern most potion of the island. Walk all the way to the very tip of the island, which you will share with some seagulls, for uninterrupted views of the Seine and the Pont des Arts, with the Louvre on your right and the L'Académie Française on your left. At the eastern edge of the park, overlooking Pont Neuf, is the bronze Equestrian Statue of Henri IV cast in 1818 from a mould made from the original 1618 statue. Henri IV was nicknamed the Green Gallant, and it is he who gave his name to this square which originally did not exist, but has built up from sand by the action of the river since the bridge was built. 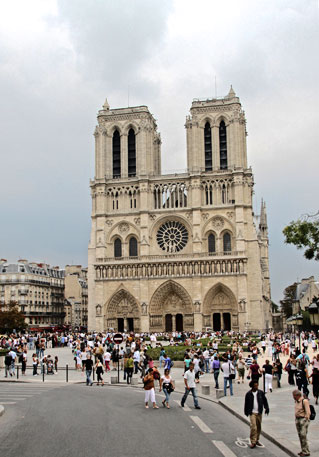 Pont Neuf – This bridge, which where it crosses the island is called Place du Pont Neuf, is the "new bridge", at least it was new in 1607 when first opened after 30 years of and off again construction. Today it stands at the center of the city and is a fine example of architecture of the time, and modern upkeep.

Place Dauphine – This triangular "square" is enclosed on two sides by traditional Parisian buildings with small cafes and art shops at the ground floor, and residences above. On the third side is the Palais de Justice.

Palais de Justice – Also called the Court of Cassation, this impressive block of buildings runs all the way to the Pont Au Change and includes many historic structures such as the Conciergerie Prison, and Sainte Chapelle. The Palais de Justice is open only during mornings, from 9 until 1PM.

Sainte Chapelle – This royal chapel is small but contains impressive brilliant stained glass. Open every day from around 9 or 9:30, depending on season, and closing around 5. In the evenings concerts are sometimes held.

Flower market – Beside the Tribunal is the flower market, contained in a group of low open structures various shops sell plants of all descriptions. This is mostly for your window box or garden if you are a resident of the city. It provides a great refreshing glimpse of local horticulture.

Pont au Double – this bridge is probably the best known as it is in front of the cathedral, and that is the center point of a visit to the island.

Notre Dame de Paris – Of course a classic landmark not to be missed. Open from 9 until 6 most days it is the pre-eminent example of medieval cathedral worldwide.

Square Jean XXIII – This open square surrounded by trees behind the cathedral is a great place to get some fresh air.

Square de l'Ile de France – Almost at the end of the island is this square, of course again triangular

Mémorial des Martyrs de la Déportation – At the extreme eastern end of the island is this somber memorial to those who died during WWII after being deported to Nazi camps. Also known as the " Holocaust memorial " this modern structure is designed to create feelings of oppression, at least for a moment.

Île Saint-Louis Another Island Île Saint-Louis is the easterly neighbour of Ile de la Cite and although smaller does have many intereting sites. Don't miss the chance to visit both as the are directly next to each other in the Sein.

Cross directly from one to the other via the pedestrian only Pont Saint-Louis which connects Quai d'Orleans to Quai de Borbon. On the Saint-Louis side enjoy one of the many fine cafes or look into the small shops that serve the residents of the island.

Don't walk far though as it is a small island and you'll soon have left it!